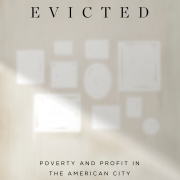 Matthew Desmond is a very smart man. An associate professor and former Junior Fellow at Harvard, Desmond holds a PhD in sociology from the University of Wisconsin in Madison and has published four books, the most recent of which, Evicted: Poverty and Profit in the American City was released on March 1. In September, Desmond was awarded the prestigious MacArthur Genius Grant to pursue research on evictions around the world.

After spending over a year living amidst Milwaukee’s poor, Desmond is something of an expert on eviction. He is well aware of the disproportionate impact it has on women and communities of color. He knows that past eviction correlates strongly with material hardship and depression, and that housing instability can harm a child’s ability to succeed in school. He also understands that having access to an attorney is perhaps the most powerful tool available to keep families faced with evictions in their homes.

But the sad reality is that if these families had the money to hire an attorney, they would probably not be facing eviction in the first place. Perhaps the family fell behind on rent because of an unexpected illness or layoff. Perhaps it is facing discrimination based on race, sexual orientation, or physical ability, or retaliation after reporting unsafe living conditions. Regardless of the legitimacy of their claims, these unrepresented families often stand little chance when facing their landlords’ trained attorneys in court.

While indigent defendants in serious criminal cases have a constitutional right to an attorney, individuals facing life-altering civil legal problems—such as the threat of homelessness—do not. Civil legal aid programs in Massachusetts and throughout the country do their best to provide low-income litigants, including tenants facing eviction, with the critical advice and representation they need to achieve justice.  A 2012 eviction study conducted by the Boston Bar Association in Quincy, Massachusetts, found that two-thirds of tenants who received full representation were able to avoid eviction; meanwhile, only one-third of tenants who were offered limited assistance were able to remain in their homes.

Unfortunately, over half of eligible clients who seek civil legal aid for housing cases in Massachusetts are turned away due to lack of funding. This “justice gap” is unacceptable—particularly considering that investing in civil legal aid actually saves the state money in the long run. In Massachusetts, it is estimated that legal aid eviction assistance saved the Commonwealth over seven million dollars in averted shelter costs in FY15 alone.

Housing instability is one of the most pervasive problems facing the urban poor, and civil legal aid is a proactive, cost-effective solution to the social and economic problems that it causes. As Desmond eloquently puts it, “There are moral costs we incur as a society when our citizens are denied equal protection under the law and wrongfully thrown from their homes by court order.” With all the evidence in place, it shouldn’t take a genius to support increased funding for civil legal aid.

Five things you should know about Richard Dubois
Scroll to top