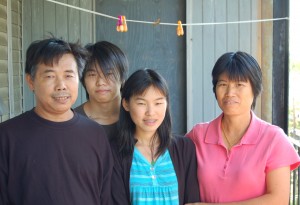 Man Yi, Chao Xiong, and their children arrived in the United States from a small village in China two years ago after waiting more than a decade to enter the country lawfully. Upon settling in the East Boston, mother Man Yi and father Chao Xiong both found jobs, and their two children, Daisy and Sam, started school. During this time, they dutifully paid the rent for their East Boston apartment, and they began to save money to send Daisy and Sam to college.

Then one day last January, as Man Yi sat down for lunch, movers and a constable arrived at their door. Bewildered and frightened, she attempted to communicate to the movers that they were good tenants. None of the movers spoke Chinese, and soon she found herself on the street surrounded by her belongings.

At the time, the family was unaware that their landlord, who lived below them in the same building, had been foreclosed on by the bank months prior. Despite the foreclosure, he had continued to accept their rent. He also kept them in the dark by screening their mail for eviction notices from the bank.

The bank soon began eviction proceedings against the Man Yi and Chao Xiong. Fortunately, they contacted Greater Boston Legal Services (GBLS), and an attorney there negotiated with the bank on their behalf. The attorney discovered that the paperwork used by the bank’s lawyers to evict the family had expired. With legal services’ representation, the eviction was stopped, Man Yi and Chao Xiong obtained priority status for stable, affordable housing, and the bank agreed to compensate them for their expenses. They will be allowed to remain in their East Boston apartment until they can secure new housing.