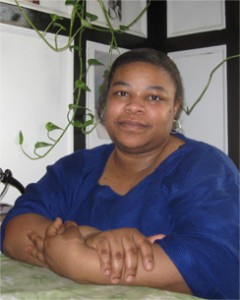 Carmelita, a single mother of three from Mattapan, had to face a difficult choice that is all-to-common for single working parents, especially during times like these. She had to choose between work and family.

Her 7-year-old daughter was having serious behavior problems in school and becoming more and more disturbed and unhappy. Children’s Hospital diagnosed her with emotional and psychological disorders, and they confirmed what Carmelita already knew – that her daughter would do better with more attention from her. Carmelita tried to be with her daughter as much as possible, but she had a full time job at a health center that required working on Saturdays.

While at work, Carmelita received calls almost daily from her daughter’s school and from her after-school program because her behavior was unmanageable. Carmelita often had to leave work early to get her daughter. She also relied on help from her 17-year-old son, who would have to leave school early or even miss an entire day to watch his sister.

She thought she would be eligible for unemployment while she looked for a new job because she had left for a good reason, but she was denied. The Department of Unemployment Assistance (DUA) had a regulation that automatically denied benefits to anyone looking for part-time work after a recent history of full-time employment. Carmelita was told that she could appeal, but it did not seem like she had any chance of winning.

She had nearly given up when she called Greater Boston Legal Services (GBLS). A legal aid attorney took up her case and represented her at the appeal. The attorney successfully argued that the unemployment regulation had exceptions for people with disabilities and it should be the same for the caretaker of a child with disabilities. The case set a precedent for other working parents.

Carmelita was able to pay off the money she borrowed money to pay for things like her kids’ field trips. Her family is no longer on the precipice. And the most important result is the change in Carmelita’s daughter, who’s behavior is significantly better; she is a happy child now.