Carmen feared for her life when she made the difficult decision to flee violence in El Salvador and journey with her young son to safety. Unfortunately, their arrival in the United States brought new challenges.

“I made the decision to come to the United States, and once I crossed the border things became very difficult for me,” Carmen said through an interpreter. U.S. immigration officials detained Carmen and her son and began deportation proceedings in Boston immigration court. Unless Carmen prevailed in court, it was likely that the U.S. government would force them to return to El Salvador, where she feared they might be tortured or killed.

Unlike in criminal cases, defendants in immigration court have no right to an attorney. Like thousands of other undocumented immigrants, Carmen and her son faced the prospect of navigating a complex court system in an unfamiliar language alone. 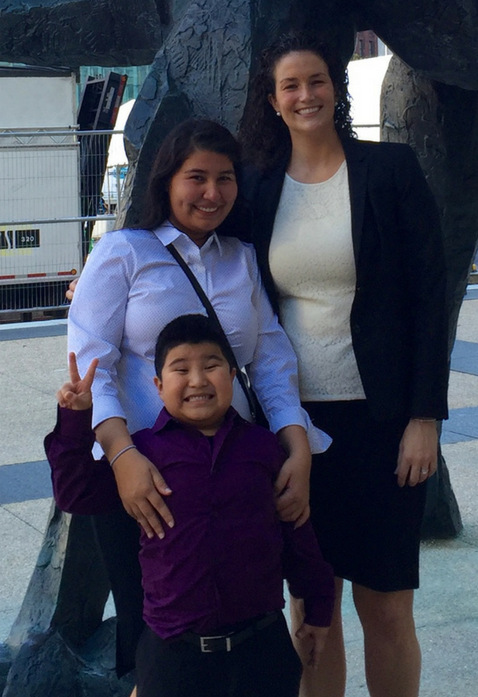 Carmen and her son with Katie.

Carmen said that U.S. officials treated her like a criminal, and the stress she experienced turned into severe depression. As she received mental health treatment at the Edward M. Kennedy Community Health Center in Framingham, Carmen shared her concerns with her behavioral health provider. The therapist referred her to Katie Condon Grace, a legal aid lawyer with MetroWest Legal Services, who works at a medical-legal partnership at the health center twice a week. After meeting with Carmen and her son, Katie determined that they had a strong claim for asylum—and therefore permanent resident status—under U.S. law. “The fact that Katie appeared in my life gave me a ray of hope in the darkness,” said Carmen.

Katie represented Carmen and her son in a series of hearings in Boston immigration court, as Carmen feared for her life. The proceedings dragged on for more than a year and a half before an immigration judge finally granted Carmen and her son asylum. They are now legal permanent residents of the United States who live without fear of the violence they faced in El Salvador.