Danielle’s daughter was born with sickle cell anemia, a potentially life threatening disease. After her applications for benefits were denied twice, Danielle reached out to Greater Boston Legal Services (GBLS) for help with what would become an eight-year legal battle for her daughter’s health coverage.

When her daughter was still an infant, Danielle missed work frequently to bring her to the hospital, eventually losing her job. She applied for Supplemental Security Income (SSI) benefits for her daughter and was denied. She reapplied, and was denied again, this time due to an administrative error – a missing signature on the application.

Danielle found a job at the Head Start program which allowed her to care for her daughter and provide services for other families. Through that job, Danielle learned about Greater Boston Legal Services. She reached out, and met Tara, her GBLS attorney.

Tara helped Danielle appeal the SSI decision before an administrative law judge. At the hearing, a medical expert downplayed the severity of the disease, and the appeal was denied. Danielle and Tara fought a long battle of denials and appeals for seven years, while Danielle’s daughter continued to face frequent health crises and hospitalizations. 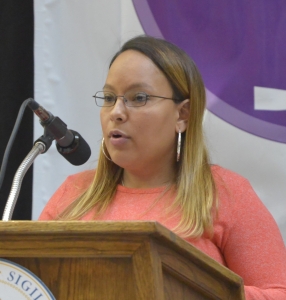 Over the years, Danielle became an expert on her daughter’s sickle cell anemia. She learned how reactions were triggered, what the best conditions for her daughter were, and to be on guard at all times. Danielle knew that despite what the medical professional in administrative court said, her daughter deserved the SSI benefits. Meanwhile, she put herself through school to become a social worker, motivated to help people in similar situations to her own.

Through advocacy, GBLS empowered Danielle in a civil legal system that felt inaccessible and frustrating. “Whenever I felt out of my element and scared, Tara told me, ‘We’ll take care of the lawyer piece, you take care of your daughter.’ It gave me a sense of security, a feeling that I had a voice,” Danielle said. “GBLS-and Tara- never gave up on us, and that gave us hope.”