Fred Connelly has always been a hard worker, juggling jobs in construction, teaching, and wood-working in his basement workshop to make ends meet. He never imagined he’d be facing foreclosure on a house he had built himself and lived in for 30 years. “After working hard my whole life and playing by the rules, I never thought my family and I would end up homeless,” said Fred. But a sudden injury set off a chain of events that left him unable to pay his mortgage and seeking civil legal aid to save his home.

Fred and his wife, Rose, bought their house in 1978. He renovated the house himself, digging and laying the foundation with his own hands, constructing walls to transform what was once a summer cottage into a year-round house fit for an entire family. In that house, Fred and Rose raised their son and grandson. The four live in the house to this day. 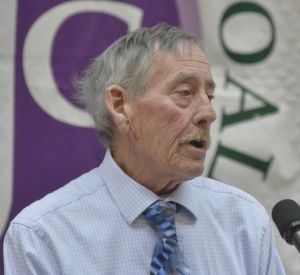 When a lull in the construction business came, Fred took a teaching job that he held for more than 30 years, teaching students the construction trade in the same vocational high school he attended. In February 2005, Fred broke up a fight between two students and was pushed into staging equipment, resulting in three herniated disks. The injury and four resulting surgeries took Fred out of the work force for many years. Not long after Fred’s injury, Rose was laid off from her job, and Fred’s son was diagnosed with cancer. Without steady income and facing numerous health issues, the family struggled to make mortgage payments. Fred tried to refinance, but without success.

In February 2014, Fred received a foreclosure notice instructing him to remove all of their possessions from the house within 48 hours. With help from their neighbors, the family moved out everything they owned, including Fred’s elaborate – and heavy – basement carpentry shop.

Rose turned to her sister, a city hall employee, for help. She referred the family to Quincy Community Action Programs (QCAP), where a representative told Fred that only a judge could tell him that he had to leave. QCAP referred the family to a housing clinic at Greater Boston Legal Services. That’s where they met their lawyer, Todd Kaplan, who worked hundreds of hours over two and a half years; in housing court, with the department of Housing and Urban Development, and with two brokerage firms.

Todd’s advocacy paid off. “The last time we were in court, the judge looked at the lawyers from the bank and said ‘You’re not taking this man’s house. Not now. Not after he built it himself. We have to do something.’ I knew then there might be a chance to get my home back,” Fred said.

Todd negotiated a plan for Fred to repurchase the house. With his back beginning to heal, Fred has returned to work with his son at a contracting company. He is thankful to Greater Boston Legal Services. “What these people do is nothing short of amazing,” Fred said, “I want other people to be able to get the help that I did.”

In January 2019, Fred Connelly spoke at the Massachusetts State House at the 20th Annual Walk to the Hill for Civil Legal Aid to raise awareness about the need for civil legal aid funding.