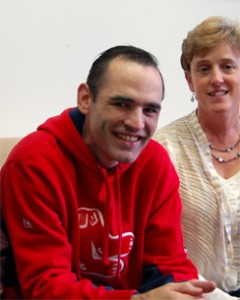 Before he came to legal aid, Leigh was facing a crisis in his life. Leigh had suffered a traumatic brain injury as a child that left him with functional disabilities, so as an adult he lived with his family. However, after a violent domestic attack on Leigh sent him to the hospital with serious injuries, he needed a new legal guardian. There were recurring conflicts between his MassHealth and Medicare coverage, which made it difficult for him to receive critical medical treatment and prescriptions. And, on top of it all, Leigh needed to find somewhere safe to live.

Luckily, Leigh has a generous and dedicated uncle named Peter, who wanted to become his legal guardian. But Peter and Leigh needed help to navigate the numerous legal and administrative problems Leigh was dealing with. According to Peter, “I’ve never had to deal with a situation like this before. Often, we didn’t even know who to ask when we had questions.”

The court referred Leigh to MetroWest Legal Services (MWLS) in Framingham. There, he found help from a team of attorneys who specialize in a variety of practice areas – family law, housing, disability benefits, and Medicare. Over the next year, the attorneys led him through complicated bureaucratic mazes to get the help he needed. Today he feels safe living on his own in Natick, and he has his uncle’s support as he works to build an independent life.

“Finally I can move forward,” Leigh says, “thanks to my legal aid attorneys.”