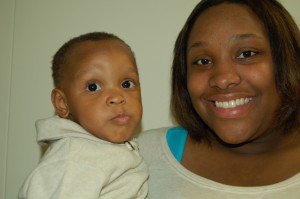 Lynnicia worked part-time at a day care center, earning $800 a month. It was enough to pay her share of the subsidized rent on a bare-bones apartment where she lived with her two-year old son Myshon. But in 2013, Lynnicia discovered that the federal subsidy attached to her apartment was expiring, and the rent would soon be raised. She would barely have enough left over to feed herself, let alone care for her son, who is being treated for sickle-cell disease. She considered moving in with her mother, but her mom also lives in subsidized housing and can’t host guests for more than 30 consecutive days.

With nowhere else to go, Lynnicia applied to stay in an emergency family shelter. She was placed in a shelter in western Massachusetts. Since she had no car, commuting to her job and Myshon’s medical appointments would have been nearly impossible: a train and bus journey that would take more than 6 hours each way.

So Lynnicia contacted the Massachusetts Law Reform Institute, where attorney Liza Hirsch agreed to take her case. Liza immediately contacted the shelter agency to request a transfer to a shelter in the Boston area based on Myshon’s need for medical treatment. The request was granted, and Lynnicia was placed at a shelter in Brighton. She can continue to work, and Myshon receives the medical treatments he needs. Lynnicia is grateful that she found legal aid. As soon as she met Liza, she says, “I knew there was light at the end of the tunnel.”

Lynnicia’s story was featured in a WBUR radio story on December 16, 2013. Click here to read more.