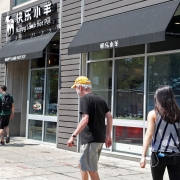 In what advocates say is a happy resolution to a problem that workers are often too fearful to report, 14 former employees of Happy Lamb Hot Pot, which has locations in Central Square and Chinatown, recently reached a settlement of wage theft claims with the restaurant.

The employees alleged in October 2018 that management, among other things, stole tips, did not pay minimum wage or overtime, and retaliated against workers who complained.

The plaintiffs sought approximately $883,000 in owed wages and damages, according to court documents. The settlement amount was confidential, but Bethany Li, the plaintiffs’ attorney and head of the Asian Outreach Unit at Greater Boston Legal Services, said the plaintiffs were “very satisfied.” Read more in the Boston Globe.