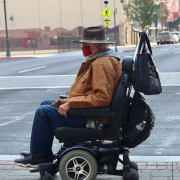 Tom Murphy, a supervising attorney at the Disability Law Center, was quoted in a Nov. 24 WBUR article.

A long-running civil rights movement has won a huge but quiet victory in Boston. It’ll mean millions of dollars in spending, and construction projects across the city — including in Jamaica Plain, where Michael Muehe has lived for 20 years.

“Many of the curb ramps along here, many of the intersections have curb ramps that are insufficient or are nonexistent,” said Muehe, while guiding his wheelchair down Jamaicaway.

The Americans with Disabilities Act of 1990 lays out how curb ramps should be built. Yet, a 2018 survey by the Disability Law Center in Northampton showed that less than half of the city’s 23,000 curb ramps met ADA specifications.

“There’s no ADA police,” said Tom Murphy, a supervising attorney at the law center, an independent nonprofit. He said the Justice Department has the authority to enforce the ADA, but for the most part, improvements have been driven by residents. In recent years, many across the country have successfully won suits over curb ramps.

Murphy represented a group including Flanagan and Muehe when they approached the city of Boston in 2018.

Eviction filings down from pre-pandemic years in region, but need for services...
Scroll to top