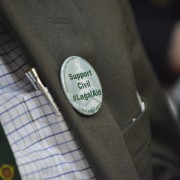 In law as in medicine, an emergency room is neither the most cost effective nor beneficial way to deliver justice or provide health care. Seeing your doctor regularly makes it easier and less expensive for individuals and for the health care system overall to stay healthy. Having a lawyer to advise and assist you when you confront a legal problem brings similar benefits to the system of justice.

Unfortunately, because lawyers are not available for those who cannot afford them in civil matters, the courts have become “the emergency rooms of society” as New York Chief Judge Jonathan Lippman put it in an article for The Judge’s Journal earlier this year. Courtrooms are where we turn when we need help resolving conflicts over basic necessities such as housing, employment, classroom accommodations for our children with disabilities, and family conflicts related to child support and custody, divorce, and domestic violence.

Just as operating rooms need trained doctors, the courts only work when all parties have access to legal advice and assistance. If, as often happens, only one side has a lawyer, the playing field is anything but level for the person without help and advice. While people facing serious criminal charges have a right to a lawyer, that is not the case in even very serious civil matters. In civil matters, if you cannot afford an attorney, you can apply for legal aid services, which are approved on the basis of financial need. But there are not nearly enough resources to meet the need. A staggering 64 percent of eligible clients in Massachusetts are turned away by civil legal aid organizations due to lack of resources according to a recent report by the Boston Bar Association’s Statewide Task Force to Expand Civil Legal Aid in Massachusetts.

What this means for our courts, in practical terms, is that court staff have to spend more time assisting litigants who are trying to represent themselves; civil court proceedings are markedly slowed down; evidence is not properly presented; and litigants make repeat court appearances. Most alarming, however, is that 60 percent of the Massachusetts judges surveyed for the report stated unequivocally that lack of legal representation was hindering the courts’ ability to ensure equal justice for litigants attempting to represent themselves.

This isn’t just a matter of concern for the usual suspects, such as civil legal aid attorneys, case workers, social justice advocates, and those in need of legal services who cannot afford them. It’s a matter of grave concern for the state’s business leaders. Susan Alexander, Executive Vice President, General Counsel, and Corporate Secretary for Biogen Idec, Inc., which employs more than 3,000 Massachusetts residents, notes in her statement to the task force report that Biogen, like all businesses in the Commonwealth, can only thrive in a healthy state. “Legal aid has the power to maintain safe and vibrant communities during difficult economic times by keeping families from homelessness and poverty,” Alexander writes.

Lon Povich, Executive Vice President, General Counsel, and Secretary of BJ’s Wholesale Club, notes simply that the inefficiencies generated in the courts by pro se, or self-represented, litigants damages the entire system. “Saying that these individual, civil cases ‘clog’ court dockets makes it sound like they are unimportant, which they are not, but they take more time of our overworked judges and staff than do similar matters involving represented parties,” Povich says. “As a result, the current deluge of pro se litigants limits the effectiveness of the courts for all individuals and businesses in our state.”

The solution proposed by the Task Force is to increase the Commonwealth’s investment in civil legal aid by $30 million over the next three years. Currently, the state invests $15 million annually in civil legal aid.

Such a move would likely save the state between $34 million and $51 million in economic benefits. While that alone should be enough to convince policymakers to make the investment, there is one more compelling reason to do so. The benefits of a fairer and more effective justice system for all of us, especially for those in need, are simply incalculable.