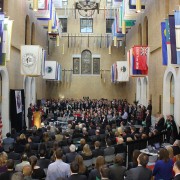 BOSTON, October 10, 2014 – The board of directors of the Massachusetts Legal Assistance Corporation (MLAC), the largest funding source for civil legal aid in the Commonwealth, welcomes two new members, Dr. Guillermo Gonzalez and Geoffrey A. Wilson, who were recently appointed by the Supreme Judicial Court. The court also re-appointed Rahsaan D. Hall of Stoughton to a second five-year term on the board, based on the recommendation of the Massachusetts Bar Association.

Dr. Gonzalez of New Bedford was on the board of South Coastal Counties Legal Services from 2006-2011. A licensed psychiatrist, Dr. Gonzalez served as medical director of the Center for Health and Human Services, Inc. in New Bedford, and is currently in private practice.

Wilson of Greenfield recently retired as Presiding Justice from the Franklin County Probate and Family Court, to which he was appointed after a career in private practice in Greenfield. He also served on the boards of two programs that were consolidated into Community Legal Aid—Western Massachusetts Legal Services (WMLS) and the Massachusetts Justice Center—and was chair of the board of WMLS.

MLAC is governed by an 11-member Board of Directors. Ten members are appointed by the Supreme Judicial Court, and the 11th is the Chief Justice for Administration and Management of the Trial Court or that Justice’s designee.