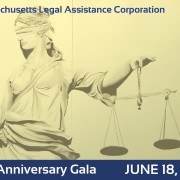 BOSTON, May 17, 2018—The Massachusetts Legal Assistance Corporation (MLAC), the largest funder of civil legal aid programs in the Commonwealth, will hold its 35th Anniversary Gala on June 18 at Morgan Lewis in Boston.

“For 35 years, MLAC has proudly funded civil legal aid organizations in the Commonwealth. These organizations provide advice and representation to low-income people who face serious civil legal issues related to domestic violence, housing, immigration, employment, health care, access to benefits, and other challenges,” said Marijane Benner Browne, Chair of the MLAC Board of Directors. “Lonnie and all longtime civil legal aid employees have put in decades of tireless advocacy, and we are excited to celebrate them and the state’s commitment to investing in justice.”

In response to the threatened elimination of federal funding for civil legal aid during the administration of President Ronald Reagan, the Massachusetts legislature created the Massachusetts Legal Assistance Corporation in 1983 to provide a state funding source for legal aid. MLAC currently funds 14 local and statewide civil legal aid programs, which collectively closed nearly 23,000 cases last fiscal year—benefitting more than 83,000 individuals and family members in every corner of the state. In addition to funding, MLAC provides leadership and support to these programs, serves as fiscal sponsor for special projects like the Greater Boston Immigrant Defense Fund, and partners with the private bar to protect the state appropriation for civil legal aid.

“Since its inception, all of MLAC’s work has been conducted under Lonnie’s leadership. We are deeply grateful for his service, and congratulate him on his well-earned retirement,” Benner Browne said. “We are pleased to announce that the proceeds from the gala will be used to create the Lonnie Powers Innovation Fund, which will carry the spirit of Lonnie’s work into MLAC’s next chapter.”

The Lonnie Powers Innovation Fund will allow MLAC to support projects that increase access to legal information and help, and that utilize new technologies and creative models of service delivery to meet the evolving needs of low-income people across the Commonwealth.

“Civil legal aid is even more important to Massachusetts now than it was 35 years ago,” Powers said. “I hope this event will be a shared celebration of the work that MLAC and its partners—legal aid organizations, bar associations, law firms, individual lawyers, the judiciary, and the legislature—have done to advance and promote equal justice for all in the Commonwealth. It will also be an opportunity to recognize and celebrate the courage and strength of the clients of civil legal aid with and for whom we do this work.”

For tickets and more information about this event, visit the MLAC website.