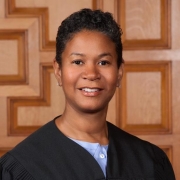 Justice Budd brings extraordinary credentials, judicial experience, and legal intellect to the position. In her four years on the SJC and seven years on the Superior Court before that, she has shown herself to be a talented, thoughtful, and creative legal thinker with a deep commitment to fairness and justice for all. A former member of the board of directors of Greater Boston Legal Services, she also brings a keen understanding of the essential need for civil legal aid.

Upon accepting Gov. Baker’s nomination to be chief of the state’s highest court, Justice Budd called the occasion “bittersweet,” as she and the legal community mourned the passing of Chief Justice Ralph D. Gants, whom she called a “mentor and a friend.”

Justice Budd filled the Superior Court seat of Justice Gants when he was elevated to the SJC, and she will now fill his role as chief. The legal aid community keenly felt the loss of Justice Gants, who was a longtime champion of civil legal aid and access to justice. We are confident that she will recognize legal aid’s vital role in safeguarding the Commonwealth’s most vulnerable people.

We celebrate this historic nomination and that Massachusetts will have its first Black woman chief justice.

We applaud Gov. Baker for this exceptional nomination and the Governor’s Council for its unanimous confirmation. We look forward to working with Chief Justice Budd to advance justice for all.