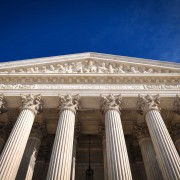 Representative Ruth Balser will file an amendment to increase the House Ways & Means recommendation by $1.5 million, for a total appropriation of $21 million, as the House budget is debated. This funding increase would be another important step in addressing the significant unmet need among those who are eligible for and seek civil legal aid. Eligible residents are those with incomes at or below 125 percent of the federal poverty level, or $591 per week for a family of four.

“Given the great depth of unmet need among those seeking civil legal aid, and the significant return on investment yielded by civil legal aid funding, we’ll continue to advocate for increased investment by the state,” Powers added. “Our funding request is particularly urgent when proposals have been put forward in Washington, DC that would eliminate the Legal Services Corporation, which provides funding to civil legal aid organizations throughout the country, including several in Massachusetts.”

Earlier this year, MLAC released its annual Economic Benefits Report, which showed that civil legal assistance provided by MLAC-funded programs in fiscal year 2016 yielded at least $49.3 million in savings or new revenue for the state and its residents. Successful representation in appeals to Social Security Insurance, Social Security Disability Insurance, Unemployment Insurance, Medicare coverage, and federal tax decisions resulted in $15.8 million in new federal revenue for the Commonwealth. An additional $21.2 million was gained through child support orders, debt relief for homeowners in foreclosure cases, and additional non-federal Unemployment Insurance claims and representation for tenants. The state saved $12.1 million in services that it would have otherwise provided if not for civil legal aid. These services include emergency shelter, foster care, and medical costs related to domestic violence.

“Legal aid organizations serve our most vulnerable residents by helping them avoid homelessness and unemployment, gain access to health care and veterans’ services, receive a quality education, and escape domestic violence. Access to legal advice and representation should not be dependent on income, and we must ensure that these programs have the resources they need,” said Marijane Benner Browne, chair of the MLAC Board of Directors. “Additionally, this work yields significant economic returns for the state. This is an investment that the state should be making.”