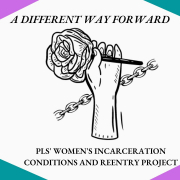 On Monday, Prisoners’ Legal Services’ Women’s Incarceration Conditions and Reentry Project released a new report detailing the traumatic experiences of incarcerated women in Massachusetts and the urgent need to remedy the harm that women face in the carceral system. PLS attorney Sarah Nawab is the primary author of the report, A Different Way Forward: Stories from Incarcerated Women in Massachusetts and Recommendations.

The research is based on interviews with 22 women, either currently or formerly incarcerated in prisons and jails across the state. Of the women interviewed, the vast majority — 19 women — said they had either experienced or witnessed sexual harassment or sexual violence while in custody.

“I think sexual misconduct happens with some regularity, and we have been unable to represent women in a brutality lawsuit like we do for many other people,” said Lizz Matos, PLS executive director, who was quoted in a WBUR article about the report. “And so this report was a response to that problem of not being able to shine a light on an issue and to show, through personal accounts, that this is real and it happens. And it needs a state response.”