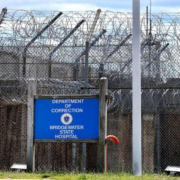 A new report by the Disability Law Center suggests staff physically restrained and involuntarily medicated over half of their patients at the Department of Correction’s Bridgewater State Hospital over six months.

The report focused on the facility that houses over 200 men suffering from mental illness, and alleged staff used force to inject sedatives into unwilling patients. The group recounted some of 15 incidents, documented by video, where staff in riot gear held down patients as they were injected with medications, often despite their protests and without an indication that there was an emergency.

“The pattern and practice of violent staff interventions would not be accepted in a DMH [Department of Mental Health]-licensed psychiatric hospital,” wrote authors from the center, which is charged by state courts with monitoring whether reforms are happening at Bridgewater.