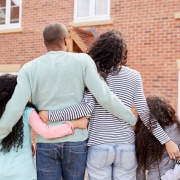 Commonwealth Magazine in a December 27 article reported on a new Community Legal Aid pilot program to prevent child welfare removals, which is the first of its kind in Massachusetts.

The goal is to provide families in Hampden County with legal support at the start of their involvement with the Department of Children and Families, so the agency never gets to the point of removing a child. If the year-long pilot is successful, attorneys hope money will become available to expand it statewide.

“The vast majority of the cases with DCF are neglect cases, and many of those are just manifestations of poverty,” CLA child welfare attorney Madeline Weaver Blanchette said. “The wonderful thing about this pilot is we can basically harness the existing units that are already within Community Legal Aid…and work with clients to fix those substantive areas, and then hopefully have the result of being able to close their case with DCF.”

Dorothy Storrow, a child welfare attorney and board member of Community Legal Aid, said the idea for the program came out of a series of meetings that attorneys, social workers, former judges, and professors had in the wake of George Floyd’s murder last year considering how to address the longstanding problem of racial disparities in child welfare.

Racial inequity crisis in the legal profession
Scroll to top