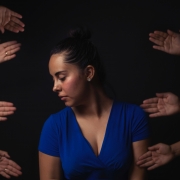 Massachusetts Law Reform Institute Deputy Director of Advocacy Jamie Sabino and Greater Boston Legal Services Senior Attorney Mithra Merryman were interviewed recently by WBUR regarding a law that was intended to protect the privacy and safety of victims of domestic and sexual violence, but has instead protected perpetrators and police. The Massachusetts law requires police to keep all reports and arrests related to sexual and domestic violence secret, something no other state does.

In fact, 16 police departments turned down WBUR’s request for records detailing their actions leading up to domestic murders, all citing the same statute.

It has also harmed victims by making it difficult ⁠— even impossible ⁠— to obtain records they need for custody battles and restraining orders.

Sabino, staff attorney at MLRI, said she was concerned about potential “unintended consequences” even as she helped advise lawmakers on the language in the 2014 bill.